Published in SoapboxMedia...This is great for us at 1700 Vine Street!!!

Just months after announcing his intention to open the Moerlein Lager House in 2011 at the Cincinnati Riverfront Park, Christian Moerlein President and CEO Greg Hardman has made another huge step in solidifying the Moerlein legacy.

On April 16th, Hardman announced that Moerlein will bring back brewing operations to Cincinnati’s historic Over-the-Rhine Brewery District. Although the company had yet to establish its own facility - Moerlein contract brews its brands at Lion Brewery in Wilkes Barre, PA - since the April 2007 launch of OTR Ale the Christian Moerlein Brewing Company has helped open eyes to the importance of local, craft beer in Cincinnati.

"We are proud to be part of the continued renaissance and economic development of Over-the-Rhine," said Hardman.

Just blocks from the site of the original Christain Moerlein Brewery on northern Elm Street near Findlay Market, the new production facility will be housed in a building that most recently was the Husman Potato Chip plant located at 1621 Moore Street (map) just north of Liberty Street and east of Vine Street.

The company has entered into a lease agreement with an option to buy the former pre-prohibition malt and lager house for the Kaufman Brewery, and plans to bring nearly 25 percent of its "high-end" beer production to the 125,000 square-foot facility by spring of 2011.

Steve Hampton, President of the OTR Brewery District, could not be happier.

"The announcement of the new Christian Moerlein brewery in Over-the-Rhine is a big step not only for Greg, but for the neighborhood as a whole. He has worked very hard and very diligently to grow not only his brands, but also the Brewery District," explained Hampton. "Greg gets the "big picture" that success breeds success, and has been committed to being a part of redeveloping Over-the-Rhine. While there are challenges to working in Over-the-Rhine, there are also greater rewards possible by being part of the history and future of a great neighborhood."

With the recent introduction of locally based Rivertown Brewing, the expansion of Mt. Carmel’s brewing facility and the recent accolades for Cincinnati Rock Bottom’s Brewmaster Mitchell Dougherty, coupled with multiple local micro-brewery projects on the horizon, Cincinnati is poised to reestablish itself as a brewing center once again.

The New Pella is in the house!

Aside from the cheesy title (it's my blog so I can amuse myself with things like this), Reid and I installed a new pella window last night. The pella was purchased from Lowe's and installed in the 4th floor space. Historically, there were no windows on this side of the building (north wall) because another building used to be there. Since the space north of our building is now a vacant lot (that we also own), we deeded the two properties into one and can install windows for added daylighting.

The pictures really don't capture how pretty the new window is...it has a dark red aluminum clad exterior that looks stunning next to the brick. The interior is unfinished wood with oil-rubbed bronze hardware. It's double-hung, historically appropriate, and we even made sure that it was made with one vertical divider down both panes - a replica of the original windows' design on the 2nd floor.
I know this is but a small accomplishment when looking at the whole scope of this project, but - wow! it brings such instant gratification!
Posted by pkh at 8:45 AM No comments:

the deck is practically finished...

...except for the actual decking (trex), which will likely be installed in the next couple of months by our all-star carpenter, Steve Berger. Steve and his crew proved how awesome they are when they ripped off the roof and raised it to accomodate the roof deck doors last fall. Below is a picture of his work. 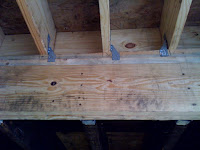 Yesterday, Reid and I installed the two closet doors on the roof deck. We ordered the doors from Lowes, frames and all. Unlike the last door installation where we had to piece together the frames, hardware, and door mechanisms, these doors came intact and ready to set in place. And it was so easy! We installed both doors in a mere 2 hours! Prehung, ready-to-install doors really are the way to go. I see why new construction is so appealing. 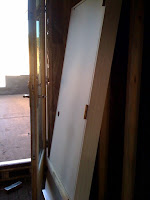 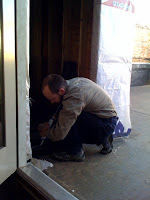 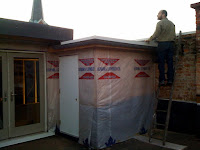 The architect, Steve Hampton, designed the deck so that I would never have to drag deck furniture up and down 4 flights of stairs to our storage unit. There is ample storage built into the deck, so storing furniture during times of inclement weather is easy! And there's so much space that Reid is already devising a plan to install two beer taps. 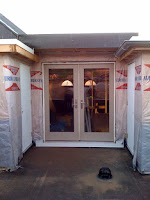 trial run of the uplighting 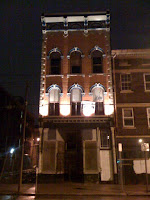 now for a sensor to automatically switch the lights on and off...
Posted by pkh at 7:51 AM 2 comments:

a little paint touch up 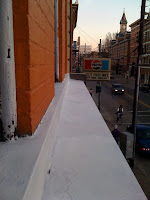 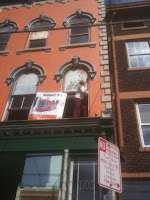 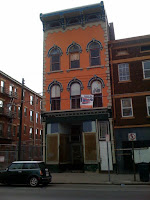 This week, Reid and I scraped, primed and painted the stone ledge below the 2nd floor windows. We can reach this area by leaning out the windows, so we didn't worry about finishing it when we had the lift last fall. I also wood puttied the round detail trim piece around the windows, as exposure to the elements has caused some rot. Recreating these round trim pieces doesn't seem particularly easy, so we thought we better putty and paint them before they rot away. Reid is excited to have the ledge painted as he intends to run some temporary electricity along the ledge for uplighting the building. This will add some light to the street at night, improving safety and showing off our paint job!
Posted by pkh at 7:15 PM No comments: