The last week of August, Reid and I took some vacation time to rent scaffolding and finish painting the storefront details. It was tedious work and took much longer than anticipated, but worth it in the end. Our storefront is rich with detail. .

But having a baby makes working on the property more complicated...fortunately, Mabel was content hanging out/sleeping in the storefront while we worked.

We also painted the building on Hamer Street, but were unable to reach the tallest corner. Incidentally, the unreachable part of the building is also home to the bricks that are in the worse condition on the building. They required some tuck pointing in order to really get this wall into an acceptable state.

So, with Winter approaching, we rented a lift and finished the tuckpointing, priming and painting this weekend. 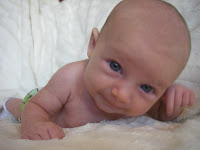 It's been a few months since I've posted, but there is good reason. Reid and I are now the proud parents of a healthy little girl, Mabel. She was born June 1st and has been keeping us busy ever since.


Although I haven't been able to work as much on the rehab site (lead paint = bad), Reid has still been working. He installed a skylight over what will become the 4th floor bathroom and has been cleaning out construction debris.

And our neighbors have been enjoying our newly landscaped lot. Thanks again, Keep Cincinnati Beautiful Future Blooms! Since our lot was landscaped, the amount of trash has greatly decreased and the neighbors can be found grilling in the greenspace!
Posted by pkh at 9:21 AM 1 comment:

Cincinnati's getting a Streetcar!

Click on the title to see the updated project plan...

In 2008, Reid & I decided to take on the rehab/restoration of this condemned building on one of the worst blocks in the city because we believed in the impact the streetcar would have on this section of the neighborhood. We knew that the block would improve, crime would decrease, and blight would be replaced by other rehabbers like us. Adding the 24 hour presence of people on the streetcar would force the open air drug markets indoors and help create a more mixed income neighborhood. It's incredibly reassuring to hear Mayor Mallory's announcememnt yesterday that the streetcar WILL happen! We're counting on it at 1700 Vine Street!
Posted by pkh at 5:49 PM 1 comment:

Our Future Blooms Tree is Blooming!

This is a sketch of what the interior and exterior will look like for all 6 windows. 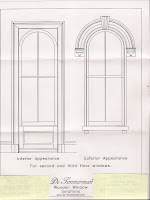 We can't wait to see the final product as Reid and I think that even the temporary windows they've installed are better than a lot of the replacement windows we've seen!
Posted by pkh at 11:35 PM 2 comments:

Remnants of a ceiling mural uncovered in the storefront

This past month, Reid has been completing demolition of the storefront in order to prepare it for white-boxing and, hopefully, rental.

Most of the mural had been painted over and then covered in a skimmed coat and then painted several times again. Only parts of the ceiling had been exposed to enough indirect moisture that the layers of paint had peeled off from the original ceiling, unveiling its history.

The mural appears to have a deco border around the perimeter of the storefront with a large painting of a landscape in the center of the room.

Unfortunately, the plaster ceiling is beyond repair and saving the mural is impossible.
This is probably a blessing though, as current building codes will require increased insulation and fire suppresion between the storefront and living space on the 2nd floor, which would be nearly impossible if we were to preserve the original ceiling.

Maybe someday we'll cross paths with a creative Art Academy or DAAP student who will be interested in recreating a ceiling mural- something that might reflect the building's more recent history.
Posted by pkh at 11:00 AM 2 comments:

Well, Cincinnati has thawed and it finally feels like we can spend more than 5 minutes in the building without freezing to death.

Although, at some point during the winter, Reid ripped down the living room ceiling, which was a mix of drywall and plaster, partially replaced after the fire that occurred on the third floor (sometime between 2003 & 2005). The patch job was not stellar and left the ceiling wavy with visible tape lines between drywall pieces. It had to go.

Last night, Reid replaced the two outside lights on the front of the building. Water had infiltrated the system and shorted out the previous lights, which (of course!) are now discontinued at Lowe's and not able to be replaced. Fortunately, our local electrical shop, Graybar in Queensgate, was able to order some better quality fixtures that should perform much better with regard to the weather.

Now the building is lit up again at night, just in time for Bockfest!
Enjoy a tasty bock beer this weekend at one of OTR's local establishments!
www.bockfest.com
Posted by pkh at 1:09 PM No comments: