So exciting! Reid and I chose to rehab 1700 Vine Street because of it's proximity to the proposed Streetcar line and because we believed in the project (that it would happen) and in the rehab of OTR (that it would happen to a larger scale than ever before - and it has!) 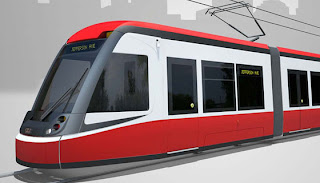 Also, the federal government has provided an additional $5 million for the project. In the award letter, U.S Transportation Secretary Ray LaHood said, “The DOT continues to support your bold vision for economic development and enhanced transportation choices for the city of Cincinnati, and we believe that this project is a significant component of that vision.”

After the vote on Wednesday, the Streetcar project team will continue discussions with Messer/Prus/Delta, the joint-venture low bidder for the construction contract, to finalize next steps in awarding the contract.

OTHER DEVELOPMENTS
UTILITY WORK
Greater Cincinnati Water Works has completed its work in Over-the-Rhine, while Cincinnati Bell has begun moving manholes along the route.


The City and Time Warner Cable are finalizing the agreements for its work to begin, and the Metropolitan Sewer District is putting out to bid the work to line its infrastructure to protect it under the rail slab.
VEHICLE DESIGN
Streetcar Project Manager Chris Eilerman and other members of the project team met with the vehicle manufacturer in Spain in mid-June to review technical specifications, engineering and safety measures for the vehicles.
OPERATIONS & MAINTENANCE
SORTA, the City’s operations partner in the streetcar project, has executed a contract with Transportation Resource Associates (TRA), a rail transit consulting firm based in Philadelphia. TRA will help to revise and refine the existing operations and maintenance plan with associated strategies, budget, and timeline. This will help to distill the current plan into a working roadmap for such operational needs as the management model, staffing, and start up needs.
FAST FACTS
Running up to 18 hours a day and 365 days a year, the streetcar will be a vital complement to the city's existing Metro and other transportation systems.

The streetcar is projected to generate a 3:1 return on our investment.


The vision remains to create a streetcar system that spurs development and is part of a larger multimodal transportation system that links areas outside the downtown core and throughout the region.


The streetcar system is envisioned to go from the River to the Zoo, University, and hospital area in Uptown.


Each streetcar will hold about 148 passengers and will easily accommodate wheelchairs and bicycles.


More than 300 workers also will be needed to build the first segment of the streetcar system alone.


There are more than 500 vacant buildings in Over-the- Rhine. A streetcar line will help attract residents and businesses to these rehabbed buildings.


In its first year of operation, the streetcar is expected to generate 3,700 trips per day, and it will provide residents using the bus system with more accessibility options.


Thank you for your patience during construction for the Cincinnati Streetcar. We’re doing our best to minimize impacts to residents, businesses and workers, but we understand this work can be an inconvenience from time to time. Once complete, the streetcar will help bring more jobs, more development, and more people to the city of Cincinnati!


As a reminder, please help keep workers safe: Use caution and drive safely through work areas.

The Crown Building on Findlay Market in OTR

So, I stand corrected. 3CDC is not the only developer who can get things done in OTR...Kim Starbuck and Kevin Pape have nailed it on this renovation. Located right on Findlay Market, this is going to be a gorgeous renovation of a once-run down, dilapidated building.
Great Job Kim & Kevin. Love it! Click on the link to read the story...
Posted by pkh at 9:40 AM No comments:

Does anyone else realize that 1700 Vine is only 100 yards away from the coolest spot in Cincinnati?

So Reid and I are starting to feel tight in our 2-bedroom condo now that the baby is a toddler. I want nothing more than to finish the work at 1700 Vine Street, move in, and enjoy our small patch of urban greenspace! However, we cannot seem to find a bank that is willing to finance the project. So far, we've talked to and been turned down by First Financial, 5/3 (although this was a couple years ago now), US Bank, and First Safety. We're still in communication with Cheviot Building and Loan (who just did the Rhinehaus project, so we're hopeful they'll see the potential in our project too!) and Cincinnati Development Fund. If neither of these pan out, we have a contact at Huntington that we'll try. Does anyone else have any suggestions? We keep hearing that our project is unconventional (residential and commercial space in one property) but I have to imagine a bank has seen this before. After all, this building is 140 years old - how have people been finding these projects for the past 140 years?  If all conventional loan products fail us, I may have to get creative - could this be a kickstarter project?
Posted by pkh at 9:37 AM 6 comments:

More evidence of the building's history

Reid and I spent Sunday afternoon working on the building. This week was very frustrating as US Bank told us they won't give us a loan 3 days after we were supposed to close on it. US Bank appraised the finished property at $500,000, which is what we needed in order to take out a loan to finish the project. Unfortunately, the loan's underwriters decided against funding the project because there is a commercial space involved (the storefront). Never mind that the storefront is only 3 blocks away from a multitude of bars and restaurants currently comprising the hottest nightlife in Cincinnati! It makes me wonder how anyone can rehab old buildings in business districts and it reinforces the need for 3CDC. They're getting the work done when we cannot.﻿﻿﻿
On a more positive note, I uncovered this remnant of ceiling painting/mural in the stairwell of what will become our living space. The most interesting part of this find is that it confirms the previous architecture of the building. We had found this same ceiling detail in the storefront - and since it is also in our stairwell, it confirms that - at one time in the past - the storefront comprised the entire first floor and the residential entrance was actually elsewhere (most likely from the back of the building through the breezeway). This is what we had suspected, since the ceiling clearance is unusually low in the residential entrance (especially given that the living spaces have 11' ceilings), but it is nice to have some confirmation.