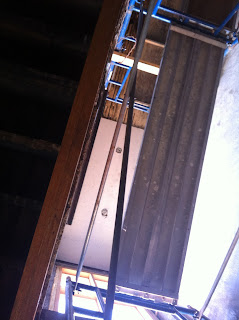 While waiting for some big construction to begin, we've been doing a few small things.
Reid hung drywall on the ceiling of the 2-story hall and I primed the walls in the dining room. 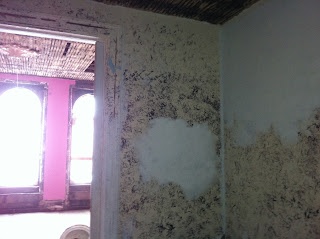 It's a little too soon to prime walls - they still need significant patching - but I needed a big change in the space and paint is the fastest, easiest way to achieve big change. The black sponge paint, more fondly referred to as faux blood splatter, is gone. Good riddance.
Posted by pkh at 1:04 PM 1 comment:

What an important next step for Northern OTR. So much history and so many breweries!!! 1700 Vine LOVES this :) Brewery District lays plans for Cincinnati Brewing Heritage Trail Posted: 05/31/2012 Last Updated: 3 hours and 8 minutes ago By: Jessica Noll, jnoll@wcpo.com OVER-THE-RHINE - The Cincinnati City Council and the Over-the-Rhine Brewery District celebrated a collaborated effort to restore and revive part of downtown's history. "What we’re doing here is tying all of our downtown back together, conceptually and physically, and that’s part of redefining us as a city, telling our story as a city,” said Mike Morgan, Brewery District’s Historical Committee Chair. “We’re a beer city. We’re a brewing city. We’re a German-American immigrant city. And there are great stories behind that.” Cincinnati has a rich history, especially when it comes to brewing, said Greg Hardman, CEO of the Christian Moerlein Brewing Company and President of the Brewery District Board. "It's time we leveraged our history to help add to a positive, marketable image for our city, and to create a unique experience for both residents and visitors," said Hardman. A motion by Councilman P.G. Sittenfeld directing the City to begin working with the Brewery District on implementation of the trail has super-majority support among Council members. "Cincinnati is the once and future beer capital, beer brewing capital of North America and that this Brewery Heritage Trail is going to help support the revitalization of the city's core as well as help create new jobs and commerce and I think we can all drink to that," said Sittenfeld. The Brewery District has created a master plan for a new Cincinnati Brewing Heritage Trail. It's hard to tell now where all the old breweries once lived and thrived, but Morgan said that he hopes to change that. "This trail is going to tell that history and it's going to do that physically, so it's going to give people a reason to go a little further; to go a little deeper into the city; and to spend more time there. When you look at heritage tours statistics nationally, people that get interested in the history of cities; they stay longer and they spend more money." The new historical markers will give visitors an opportunity to locate more than a dozen of Cincinnati's breweries in Over-the-Rhine. The trail will have codes to scan with your phones—making the walking tour interactive with historical facts and photos. But the Heritage Trail is more than just about Over-the-Rhine's history. It's about preserving and giving the entire city new life. "As long as half of your downtown is a place that people are afraid to go, you are never going to have a healthy city. If you want a healthy Cincinnati, you have to have a healthy Over-the-Rhine," Morgan said. "We've got to turn what's been a huge problem into this city's biggest asset." The Brewery District said that they hope to start with Phase I of the trail, beginning at Hudepohl Brewing Company on McMicken, later this summer. Stops on the Brewing Heritage Trail will include original brewing sites, ice houses, bottling plants, homes of the great brewers of the 19th century, and sampling of locally brewed beer.
Posted by pkh at 7:51 AM 1 comment: