Although there are a few more details still to complete, the storefront has been rebuilt and is ready for a coat of paint. As long as the weather holds up, we'll be painting it next week! We're going to leave the plywood in the windows (instead of glass) until we have a tenant, but the structure is now sound and ready for finishing details.
Posted by pkh at 11:29 PM 2 comments:

Framing out the storefront

Replacing the rotten beams under the entrance.

Poured a new concrete pad at the entrance

Remembering where we started

I wanted to take a moment to remember The Before Picture of 1700 Vine Street. Every now and again, it's important to take a look back so that we can appreciate how far we've come in a relatively short amount of time.
We purchased the property in January 2008. The roof was more than leaking - water was pouring through the back rooms so badly that the previous owner had set up a 6' long fishtank to collect the water. This turned out to be a bad idea (surprise!*sarcasm*) since it was winter and the water in the fishtank froze. The fishtank glass shattered, resulting in a giant 6' long ice cube laying in the middle of what will become my kithen. Before we had even closed on the property, Reid set up a tarp system under the failing roof that diverted water back outside and we pushed that giant ice cube out the door so that it wouldn't destroy anything else as it melted. 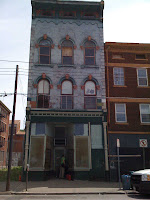 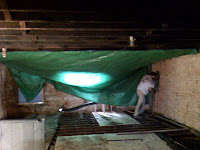 There was trash everywhere, including remnants of dead animals (mostly rodents), a mattress that was so water logged it had mushrooms growing on it, and a stove that had been wedged into a stairwell. 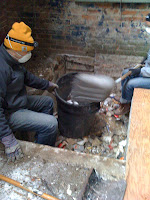 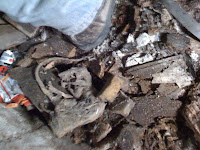 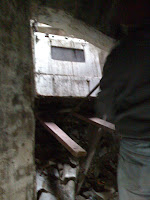 And now look at it. The building has a new roof, tuckpointed masonry, a fresh coat of paint to highlight it's Italianate details, it's garbage free inside and, with all the framing happening, has the smell of new lumber. A 3-story rotted addition has been removed. Rotten floorboards have been replaced and architectural plans are drawn. The pocket doors have been pieced back together (one had been sawn in half and both had been chewed by a fairly large dog) and the original arched wooden windows are being repaired and will be installed soon. Several rotted floor joists in the back of the storefront were replaced with pressure treated lumber.

Now, it's time for the historic storefront to undergo some much needed repair and restoration. A temporary enclosure is keeping it secure while the crew works to rebuild all of the floor joists under the front door. It's going to look spectacular once complete.
Posted by pkh at 10:13 AM No comments: