They needed major surgery...but they pulled through and are looking better than ever 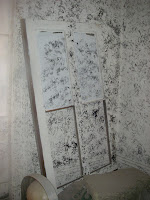 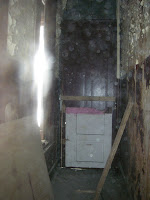 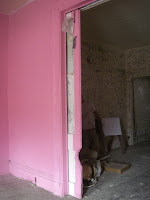 One of the most amazing of the remaining original details of 1700 Vine Street are the 9-foot tall pocket doors. However, you can see from the before pictures that a frustrated dog had chewed through one door and an idiot had sawn through another. We ended up finding the bottom half of the sawn through door nailed to another door (2nd picture), a ridiculously difficult way to cover a missing panel.

We thought it would be impossible to repair the two doors.

Then we met Richard. Formally trained in carpentry in England, he was able to rebuild the two doors, putting the two halves back together and patching the dog-chewed wood. He still has to replace and reglaze the glass, but they are well on their way to becoming the gleaming architectural gems they were meant to be. 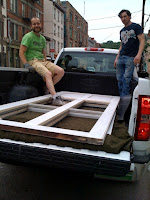 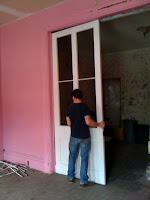 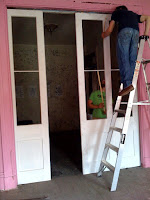 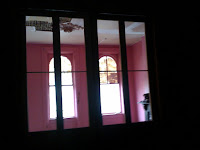 Richard and Reid installed the two doors today to determine how well they fit and what adjustments will need to be made. We are now on the search for a replacement track that runs across the floor. It has been cut off and removed, but replacing it will be an important means of stabilizing the doors, keeping them from wobbling back and forth in the pockets.
Posted by pkh at 5:11 PM