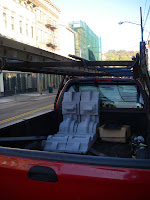 Last Thursday we were so close to getting the roof done! Hinson Roofing had taken a mold of our one intact cornice and hand-crafted 2 more out of metal to replace those that are long gone. They also crafted a missing piece for the other (left in the picture) cornice that still remains. 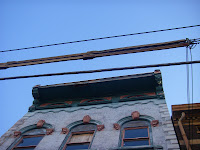 But, of course, we hit another snag... Apparently roofers need a permit to park a lift on the sidewalk. The permit cost is minimal ($80 or so) but the roofers have to register with the city, which adds a layer of bureaucracy and (worse) time! And so, of course, the city was there to shut the roofers' work down by noontime and the cornices are still not hung. I can't help but wonder how effective it would be to mandate that all drug dealers obtain a permit to stand on the sidewalk. It seems that the city would be there in a flash to shut them down if they didn't have the right permit!
But I don't mean to sound so frustrated. The roofers should have had the permit and I'm sure they'll get it within the week.
Posted by pkh at 7:03 PM