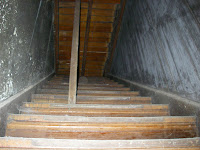 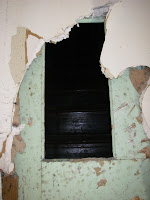 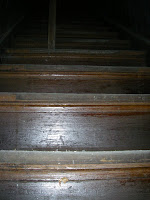 While putzing around in the storefront, we ended up busting a panel out of a door that was disguised as part of the wall...and found a staircase behind it!
The stair looks as though it used to lead from the storefront up into the living space via the addition that we're planning to take down. The stair was disguised as part of the wall and didn't come all the way to the floor, requiring whomever was using it to jump out of the stairwell into the storefront. We suspect one of the previous owners wanted a discreet means of connecting his store to his living space.
Posted by pkh at 8:55 PM